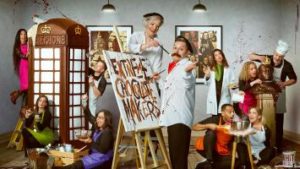 Channel 4 has commissioned a spin-off to its culinary series ‘Extreme Cake Makers’, this time focusing on an elite group of chocolatiers.

‘Extreme Chocolate Makers at Easter’ airs today (Sunday April 21) at 6.30pm. The broadcaster said: ‘There are eggs and bunnies galore – as well as struggles, late nights and breakages – as chocolatiers from around the UK deliver over 100 kilos of Easter-related chocolate heaven.’

In episode two on Tuesday (April 23) chocolatier Evelyn Day makes a metre-high white chocolate castle and fellow chocolatier Laura Miller makes a pristine chocolate head for a mental awareness campaign, then cuts out a section to reveal the brain.

Other projects undertaken in the series include a 3D chocolate map of Croatia commissioned by the Croatian Embassy, a chocolate replica of Big Ben, a chocolate version of a rare dung beetle, a chocolate sensory garden for a hospice, and a two-foot tall mermaid – complete with chocolate tentacles and a tattooed torso – for a tattoo parlour’s first birthday party.