Channel 4 gets crafty in prime time 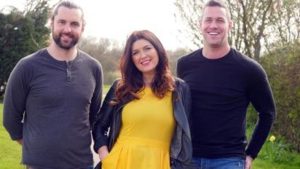 A new series on crafting kicks off next Tuesday (July 25) at 8pm on Channel 4.

‘Craft It Yourself’ is a series of six 60-minute episodes, described by Channel 4 as ‘an interior design craft series that taps into the very latest trends and techniques from the craft worlds of furniture, baking, ceramic and textiles’.

The broadcaster continued: ‘Crafting has always been huge in the UK, but now it has a whole new generation of devotees.

‘Knitting and quilting will always be the King and Queen, but websites like Pinterest and Houzz are fuelling a crafting renaissance.

‘Home and Craft are two of the most searched terms on Pinterest and this new series aims to combine our renewed love of craft with stunning interiors.’

Each week the presenters will attempt to makeover a room in a different popular interior theme, from Cuban to boho.

They will also visit master craftspeople to road-test crafts that the viewer can learn in a weekend, and crafts on a budget.

The programme was commissioned by Gill Wilson, head of features at Channel 4. She said: “This is a beautiful take on interiors, and genuinely insightful for those looking to make huge changes, without huge amounts of money.”

Executive producer Andrew Anderson added: “This series has been a real eye opener on the extraordinary things you can make with a bit of know-how and a whole heap of enthusiasm.”

The theme of episode one is ‘Bench, Chandelier & Cuban Style’. The show features Cuban styling for a dining room, while Clemency and Robin create a woven bench, Ant tries his hand at painting tiles and Robin tries his patience making a beaded chandelier.

The presenters of ‘Craft It Yourself’, which starts on Channel 4 on Tuesday July 25 at 8pm