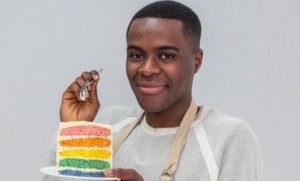 Channel 4 has announced that Liam Charles will be presenting a new baking series.

The co-host of ‘Bake Off: The Professionals’ rose to fame as a contestant in series 8 of ‘The Great British Bake Off’ (GBBO), which aired on Channel 4 last autumn.

The 20-year-old came fifth but to many he was one of the show’s standout stars. The broadcaster said: ‘Liam is on a mission to get the nation baking. Embarking on a personal culinary crusade, Hackney born and bred Liam will showcase some of his favourite sweet and savoury bakes. He will also take to the streets of his community to show how his love of baking has been inspired by his life and the street food he loves to eat when out with his friends.’

The as yet untitled show from Love Productions (the makers of GBBO) will comprise six 30-minute episodes filmed in and around East London.