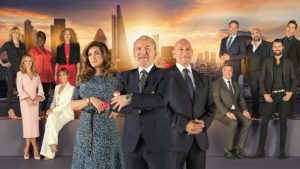 After ten years, ‘Celebrity Apprentice for Comic Relief’ is back on our screens. The star-studded business show will air in two special episodes ahead of Red Nose Day (Friday March 15) on BBC One.

Ten celebrity candidates from the worlds of entertainment, sport, journalism and comedy will take on a challenge set by ‘The Apprentice’ host Lord Sugar, as they battle it out in two rival teams to raise as much money as possible for Comic Relief’s Red Nose Day.

Comic Relief is a British charity founded in 1985 by the scriptwriter Richard Curtis and comedian and actor Lenny Henry in response to famine in Ethiopia with a vision of ‘a just world, free from poverty’. The highlight of Comic Relief’s appeal is Red Nose Day, a biennial telethon held in March, alternating with its sister project Sport Relief.

As in the long-established ‘The Apprentice’ series, both teams will be closely observed by Lord Sugar’s advisors Baroness Brady and Claude Littner, who will report back on their final results in the boardroom.

In episode one (on March 7), the task for both teams is to organise and host a themed cabaret night in less than 48 hours. They then have to sell tickets for the event and make sure the guests have a fantastic time on the night. The team who raises the most money for charity is crowned the winner.

The celebrities have to call on their contacts, plead with the public, cater and perform. With Lord Sugar expecting them to pull out all the stops, some of the candidates attempt to rope in their famous friends in an effort to get the upper hand and make their event extra special.

In episode two (on March 8), entitled ‘The Boardroom’, Baroness Brady and Claude Littner report back on their final results to Lord Sugar and reveal the winning team.

Money raised from the Red Nose Day campaign will help Comic Relief to continue funding and investing in organisations across the UK and around the world.