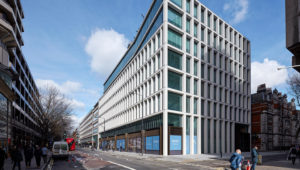 Property investment advisory firm AshbyCapital and its partner Exemplar have let three of the five retail units at The Avenue in London’s West End.

The Avenue is a recently completed new office building with retail space, designed by award-winning architects Bennetts Associates. It is located on the corner of Tottenham Court Road and Bedford Avenue.

Cath Kidston has let a total of 2,521sq ft of space across the ground and lower-ground floors. The British homeware brand, which began in 1993 from a small shop in West London, now has stores in 20 countries around the world, including more than 70 across the UK.

Sue Carvell, commercial director at Cath Kidston, said: “Cath Kidston’s expansion in its home market forms a key part of our current strategy, especially as we build our London and Travel portfolio of stores.

“The Avenue continues the transformation of the Tottenham Court Road area that is taking place so well. It provides us with a prime retail space that will attract high customer footfall and increases our brand’s presence in attractive, central London shopping locations.”

Dutch retail brand Hema, which offers homewares, stationery and cosmetics, has also chosen The Avenue for its latest UK store.

The group, which operates almost 700 stores in seven countries, serves more than six million visitors every week. Its first outlet in England opened in 2014.

Michael Bucknell, development director of Exemplar, said: “A truly stellar line-up is now taking shape at The Avenue. The arrival of Cath Kidston and Hema brings two new well-respected lifestyle and homewares brands to the area, highlighting the broadening offer for shoppers here.

“We are currently under offer on the two remaining retail units at the building and look forward to announcing further new brands taking space soon.”

He noted that Tottenham Court Road will become the West End’s main transport hub following the arrival of the Elizabeth Line in 2018, while the £40 million West End Project is creating new boulevard pavements and open spaces to encourage longer dwell times.

He added: “These high-quality retailers are the latest in a string of new entrants and established brands to recognise the strong and growing appeal of this increasingly vibrant area.”