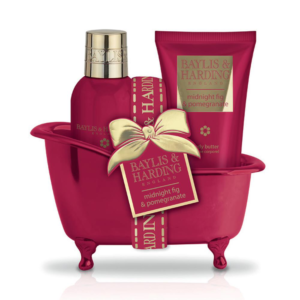 Home fragrance supplier Xystos sold out of some of the Baylis & Harding collections it launched at Home & Gift – just three days after announcing its appointment as the official supplier of the brand’s home fragrance and gifting products to independent garden centres and gift shops.

Xystos director Tom Sykes said: “It just flew off the shelves. Independent retailers are delighted that we are offering them a brand that’s instantly recognisable in department stores and on the high street.

“We’re now working hard with our new partners on the spring/summer lines which will be unveiled at Autumn Fair.”

Xystos also launched another bath and body range at the show, the Gardeners Collection from Woods of Windsor, which Tom said performed “phenomenally well”.

He added: “The price points are right on the money and the counter display units have been very well received. Woods of Windsor has sold extremely well since becoming part of our portfolio a year ago.”

Tom reported that it had been a “very good” show for Xystos and noted that the mood among buyers appeared to be much more upbeat than in the previous eight weeks.

“Our feedback suggests that it has been a challenging time, but the people I spoke to are extremely positive regarding the rest of the year.”