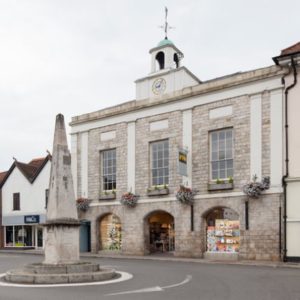 Steamer Trading Cookshop has commented on the news that its branch in Marlow branch is due to relocate.

The outlet on the Buckinghamshire town’s Market Square is set within a historic town centre building called the Old Market Hall. But the premises is set to return to its former use as a bar and restaurant.

The housewares specialist opened the doors to its Marlow cookshop in 2008 after extensively restoring the building, including repairing the town clock. To commemorate its former use, Steamer Trading created a replica of the Grade II* listed building and installed it in the shop as display shelves.

Steamer Trading has now been approached by pub chain Marstons, which have drawn up plans to create a new interior within building. Now the retailer is looking for new premises within the town.

Managing director Ben Phillips said: “We fully understood what Marstons wanted to achieve with this great building, and I saw that they were as excited by the opportunity as I was when we found it, nearly 10 years ago.

“We know that there was huge interest within Marlow for a use that truly opened up the first floor assembly room to the public and Marstons plans really do that.

“I’m sad that we’ll be leaving what is one of my favourite shops in an amazing building, but I know that we’re leaving it in good hands and I can’t wait to see the interior all put back together as one amazing space again.”

He added: “Our store manager Amanda Smith and her team have built some great relationships with customers from far and wide and we’ve got some great friendships within the town, not least with Tom Kerridge and his wife Beth, who have been really supportive and generous with their time over the years.

Locally-based celebrity chef Tom Kerridge has hosted several cookery demonstrations in the store over the years. He is co-proprietor of The Hand and Flowers pub restaurant in Marlow with Beth. In 2011, it became the first pub to receive two stars in The Michelin Guide.

Steamer Trading operates 42 cookshops and Marlow is one the largest, offering one of the widest selections of cookware, glassware and tableware within the group.

Ben stressed: “We don’t want to leave Marlow, so we’ll be trying to find a new home as quickly as we can.”

But relocation details “will come much later, as there is still a planning requirement for Marstons, so nothing will happen until they’ve obtained that. So it’s business as usual for us in Marlow until at least the Autumn.”