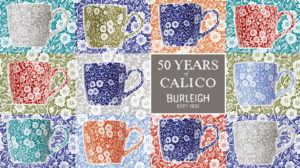 British pottery brand Burleigh is celebrating the 50th anniversary of one of its most popular patterns, Calico, with special edition mugs and four new colourways.

Inspired by Pop Art styling that reflects the mood of 1968, this design will feature on seven special edition mugs.

The new Calico mugs will be available from June (RRP £18), each carrying a special commemorative label.

To further celebrate this landmark, Burleigh has collaborated with Harrods on an exclusive new additional colourway, Mulberry Calico, which will be available from June. This continues the long-standing relationship between Burleigh and Harrods, that stretches back over 100 years when Queen Mary chose Burleigh china from Harrods.

Burleigh creative director Steven Moore said: “The new colours bring another dimension to the range and look perfect on our new mug shape. Here’s to the next 50 years!”

Burleigh has been perfecting its craft for over 165 years. Established in Stoke-on-Trent in 1851, it is famous for its blue and white ceramics which are hand-made in England using traditional techniques. Burleigh is the only pottery in the world to decorate using tissue transfer printing from hand engraved copper plates: a 250-year-old process takes seven years to master.