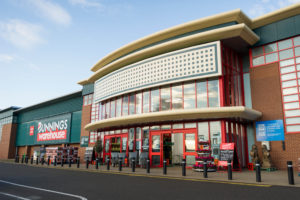 Gary said: “I had a great time opening the Broadstairs store and celebrating with the Bunnings’ team members. This area is where it all began for me and I’m sure it will be a great success.”

The store hosted a weekend of events on September 16-17 and will do the same this weekend (September 23-24). Customers will be able to enjoy a raft of family activities including the famous Bunning Sausage Sizzle, face-painting, balloon modelling and a Peppa Pig & George story session.

Bunnings is a leading retailer of home improvement and outdoor living products in Australia and New Zealand. It operates out of 362 trading locations (of which 249 are warehouses) and employs over 40,000 staff.

In February 2016 Bunnings acquired Homebase. Broadstairs joins five other Bunnings Warehouse stores in the UK: two in St. Albans, and one each in Hemel Hempstead, Milton Keynes and Folkestone. It also operates as Homebase out of 251 trading locations.

In June Bunnings announced that it plans to have 20 stores in the UK by the end of 2017.