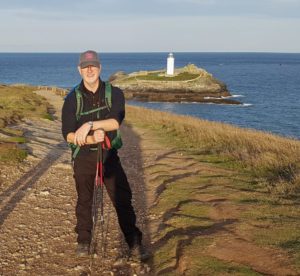 To mark RDT’s 175th anniversary, he planned to hike 175 miles along Cornwall’s coastline in seven days. He was joined on his travels by a friend and a local farmer who had seen RDT’s Facebook posts and wanted to help raise money for the charity.

The ramble started in Newquay on October 6 and was scheduled to finish just north of Mevagissey a week later on October 13.

But, as Bryan said, “Like all plans, things changed. We finished six days of clambering over the cliffs of Cornwall but sadly the weather forecast for last Friday forced us to cancel the final day’s hike.

“Wind speeds of 62 mph and heavy rain all day made it unsafe to walk the cliffs. We looked at walking further inland instead but, with weather warnings inland too, we decided this option was not viable.

“Therefore, with great sadness, we did not complete the full 175 miles in seven days. But we did manage a very credible 156 miles in six days – equating to 26 miles a day on average.”

Whilst disappointed that they were not able to finish the final 19 miles, the trio have individually completed the 19-mile stretch in their home areas to make the full 175.

Bryan would like to thank “the brilliant companies” that supported them throughout: Dulux as the primary sponsor, KitchenCraft, Home Hardware, bira, Lawsons, BHETA, Reisser “and the many individuals who sponsored us across the six days”.

Bryan has already raised £5,585 of his £6,000 fund-raising target but you can help him reach his goal by to going Bryan’s JustGiving page at https://www.justgiving.com/fundraising/rainydayramble

Bryan noted: “Donating through JustGiving is simple, fast and totally secure. Your details are safe with JustGiving – they’ll never sell them on or send unwanted emails. Once you donate, they’ll send your money directly to RDT. So it’s the most efficient way to donate; saving time and cutting costs.”

RDT operates across three sectors (housewares & tabletop, builders merchants, DIY & hardware) which have a combined turnover of more than £50 billion and employ close to 500,000 people. It is the only charity which exists solely to help people who have worked in these industries, including cookshops, hardware stores, garden centres, DIY shops, builders merchants, and all the manufacturers and distributors who supply them.