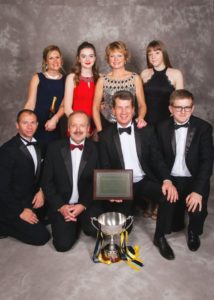 The announcement was made by Home Hardware chairman David Adams at the wholesaler’s annual convention at Woolacombe in Devon on November 18.

He said: “I’m delighted that Brown’s Home Hardware has won this award. In choosing the winner, we took into account the professional approach to retailing including promotions, store layout, staff training, customer care and overall commitment to Home Hardware.”

Brown’s Home Hardware is located on the high street of the market town of Pershore in Worcestershire. Founded in 1913, the business stocks a mix of housewares, gardening, DIY and hardware.

It is owned by Nick Green, who acquired the company 10 years ago. He originally joined as a Saturday boy in 1974 and was promoted to manager and partner in 1986. Last year, Nick developed a large area at the back of the store into a ‘secret’ garden centre, which has proved very successful.

Home Hardware is a dealer-owned wholesaler and buying group. It is owned by its 400-strong membership, which comprises independent hardware retailers, housewares shops, cookshops, ironmongers and garden centres.

Owned by the retailers it serves, Home Hardware enables its members to compete against multiple high street names and DIY superstores by combining buying power.

The Devon-based company’s team of professional buyers source products from around the globe, ensuring that stores offer ‘up to-date products at excellent prices’. Home Hardware provides national distribution from its two distribution centres at Barnstaple and Bedford.