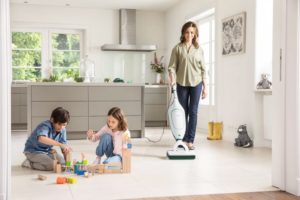 More than one in eight (13%) homeowners and renters are planning to spend at least one day on spring cleaning this year, according to research by appliance maker Vorwerk.

As evenings get lighter, two-thirds (67%) of households will be gearing up for their big clean – with 45% reaching for the vacuum cleaner as their first port of call to give their homes a fresher feel and a new look for the season. Of the remaining third who will be side-stepping the chore, 25% say they are ‘too lazy’.

However, deep cleaning has certainly paid off for 24% of households, who have pocketed missing money during the housework.

Northern Ireland homes are preparing to be the cleanest in the UK, with 77% planning on making their homes spotless this spring, closely followed by 71% in the north-west, and 70% in both the West Midlands and north-east.

Yorkshire adults are the biggest culprits for shunning domestic duties, with 20% saying they have never done a spring clean, ahead of 18% in the East Midlands and 16% of south-west households.

Women lead the charge for committing to a spring clean this year, with 71% planning on making their homes spick and span compared with 63% of men.

Spring cleaning is deemed a high priority across the generations too – particularly for nearly three-quarters of 45-54-year-olds (71%) and 63% of 18-24-year-olds. However, more than a fifth (22%) of 18-24-year-olds admit they shirk it altogether, and a further 37% say will be ‘too lazy’ to commit to a deep clean this year.

Figures suggest a clean house gives off a certain impression too: 28% claim they would judge a host negatively if the house was a state and 13% would want to offer a helping hand to clean. The top five biggest turns-off in the home are: a dirty toilet (71%), strong smalls (61%), messy kitchen (55%), unkempt bathroom (49%) and pet hair (43%).

A total of 46% who would not accept a drink in a messy home, while nearly half (44%) would refuse food and 37% would avoid using the bathroom. A third (33%) even wash their hands as soon as they get home, while 30% admit to cutting their visits short.

Commenting on the findings, Vorwerk cleaning expert Thomas Henningsson said: “It’s refreshing to see that people still put value in a good, intensive spring clean to give their homes a new look following the unforgiving winter months. A clean home can provide a welcoming haven for friends and family, and our research has found that a thorough clean gives off a good impression.”

The research was carried out by OnePoll between January 24 and January 26 among a representative sample of 2,000 adults.