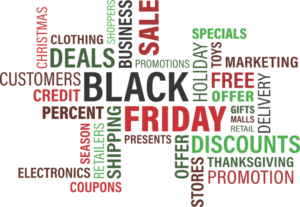 Research by www. finder.com has found that Brits are planning to spend a record £4.5 billion during Black Friday and Cyber Monday sales this year.

According to a survey of 2,000 adults across the UK by the price comparison site, bargain hunters are planning to spend over £300 on average.

Londoners intend to spend the most out of all regions in the UK. They are preparing to splash out around £533.53, which is almost three times more than those in the West Midlands, who aim to spend around £188.11 on average. And men plan to spend over £166 more than women.

The study, carried out by Mortar London on behalf of finder.com, also discovered that 14.8 million Brits hold off from making purchases for months in advance to take advantage of the sales. One in eight (12.2%) claim to have postponed buying for over three months.

Finder.com ceo (UK) Jon Ostler said: “We know that impulse spending is a guilty pleasure for 86.5% of Brits. So, considering £4.5 billion only takes into account planned purchases, we’re expecting a significant increase in Black Friday and Cyber Monday spending this year.”