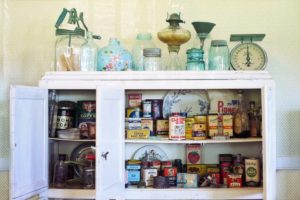 From sushi mats to sous vides, Brits have a staggering £11 billion worth of housewares that they never actually use, according to a new survey.

Research by recipe kit delivery service HelloFresh reveals that the average household boasts £415 worth of unused housewares – and 58% of Brits admit they have absolutely no idea what to do with most of the equipment in their kitchens.

A quarter of respondents said their purchases were inspired by the top-end products used on TV shows such as ‘MasterChef’ and ‘The Great British Bake Off’, while a quarter said they ‘like the way gadgets look’ on their kitchen worktop. The study of 1,500 adults also found that despite such initial enthusiasm, the average new-fangled kitchen gadget gets consigned to the back of the cupboard or drawer after just 24 days.

Almost half (56%) of those quizzed said they had brought items home from holiday with the intention of cooking recipes they had sampled abroad. But 11% said they ended up throwing the specially purchased ingredients such as herbs, spices and cured meats in the bin.

Indian cuisine was revealed as the most popular food for Brits to attempt to recreate after a holiday or meal out, followed by Spanish and Chinese. However, 10% who tried to replicate a dish said it was a disaster – and seven in ten said it was edible but nothing like what they had experienced on holiday.

The survey also revealed that the average Brit attempts to cook from scratch just five times a month. Claire Davenport, ceo of HelloFresh, said: “We Brits like to think we’re adventurous in the kitchen, but we know from our customers – and our own personal experience – that a lack of time and energy after a long day often means our good intentions fall by the wayside.

“Our brand new Rapid Box allows our customers to experiment with exciting recipes from around the globe that will be on the table in just 20 minutes. In fact, we’re the only recipe box service to offer three meals that take less than 20 minutes, to help even the busiest of customers.”

MOST UNUSED PIECES OF KITCHEN EQUIPMENT