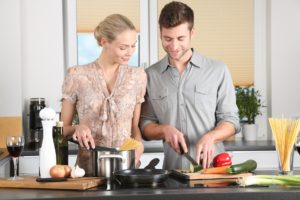 Britain is experiencing a home cooking boom, after being inspired by cooking programmes on TV, according to new research.

E-tailer AppliancesDirect.co.uk has reported a 117% increase in sales of kitchen gadgets following the launch of series 13 BBC TV series ‘MasterChef’ at the end of March.

A survey by the brand found almost half (49%) of UK adults are inspired to cook from scratch more at home after watching TV programmes such as ‘MasterChef’ and ‘The Great British Bake Off’.

47% said they have followed in celebrity chefs’ footsteps and cooked a new recipe after seeing it demonstrated on TV, while 39% said they have bought a kitchen gadget or cooking appliance after watching it in action on their favourite cooking programme.

The data found Brits are polishing up on their skills and techniques thanks to on-screen inspiration, as 35% said they have learned something new after watching a TV cooking programme and one in four have even discovered a new ingredient.

Mark Kelly, marketing manager at Appliances Direct said: “It’s really great to see that programmes such as ‘MasterChef ‘and ‘The Great British Bake Off’ are not only great entertainment, but they are inspiring the nation to get back in the kitchen and cook meals using techniques and ingredients they might not have previously thought of.

“Every year, we see a sales spike in the weeks that follow the launch of both ‘MasterChef and ‘The Great British Bake Off’. But this year the surge was particularly high. We also see an upward sales trend as the seasons draw to a close, suggesting those who have enjoyed watching are ready to try it for themselves.”

Appliances Direct sells a range of washing machines and other household appliances. The full range of products can be found at www.appliancesdirect.co.uk