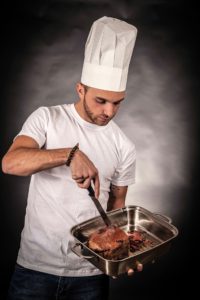 Over a quarter (28%) of Brits reduced or limited their meat consumption in the six months to March, according to new research from Mintel. And one in seven (14%) are interested in doing so in the future.

The market intelligence agency’s study reveals that health is the number one motivation. Almost half (49%) of Brits who are interested in, or who are already reducing or limiting their meat consumption, said that they believed eating too much meat was bad for their health. Weight management (29%) is the second most popular reason, followed by concern over animal welfare (24%) and the environment (24%).

The survey’s findings show that meat reduction campaigns are proving influential, some 39% of meat reducers or limiters claiming that campaigns such as Meat-free Mondays, National Vegetarian Week and Veganuary have made them more aware of the benefits of eating less meat.

Online bloggers and vloggers are also having an impact. As many as 16% of Brits say that advice from social media stars such as Deliciously Ella (Woodward) and HEMSLEY + HEMSLEY (sisters Jasmine and Melissa Hemsley) has encouraged them to reduce their meat intake, rising to 29% for those who have already reduced or limited their meat consumption.

Mintel senior food analyst Emma Clifford commented: “Despite the ingrained popularity of meat and poultry, a clear trend has emerged of people cutting back and limiting how much of these products they eat.”

She noted that the new phrase ‘flexitarianism’ (eating predominantly, but not strictly, vegetarian) that has been coined to describe this movement also highlights its “indisputably mainstream status”.

Emma added: “The flexitarian trend carves a very accessible and unrestricted middle ground between simply meat-eaters and non-meat eaters, while acknowledging a conscious effort to eat less meat. On top of the various other benefits linked to reducing meat consumption, following a meat-free diet is likely to be aspirational to many consumers, and social media is playing an important role in the attraction of this endeavour.”

Mintel’s study shows that many are adopting the flexitarian approach. The younger generations are the most likely to be following a totally meat-free lifestyle, with 19% of Brits under 25 saying they don’t eat red meat or poultry. This is the only age group that is more likely to avoid meat for environmental reasons (29%) as opposed to concerns over animal welfare (22%).

Emma said: “The ethical card – in terms of helping to maintain a green planet – is a powerful one for meat-free brands to play, particularly now that the issue is attracting a lot of attention. Flagging up that consumers are making a choice which is good for the environment and which can help to create a greener future in the long-term is likely to be a persuasive selling point.”