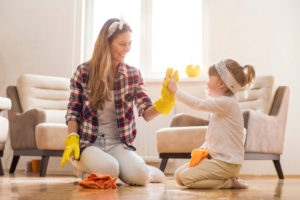 Britain is a nation with a lack of understanding about the annual spring clean, new research reveals.

A survey of 1,015 UK adults carried out by household appliances retailer AppliancesDirect.co.uk has revealed that only 41% of Brits did an annual clean this spring season. In comparison, the majority (59%) admitted that they hadn’t done any spring cleaning housework this year.

When quizzed on the reasons for their spring cleaning habits, 44% of respondents revealed that they don’t know which cleaning tasks are involved when it comes to the annual spring clean. A further 37% admitted they don’t even know what the spring clean means and a similar number (35%) said they didn’t have time to spend spring cleaning the home this year. This was followed by 27% who confessed that it is because they needed help spring cleaning, while 19% said they believe their home doesn’t need cleaning.

The survey also found that some key spring cleaning tasks were not done by many Brits, including dusting skirting boards (14%), washing bedroom pillows (11%) and vacuuming air vents (7%).

Mark Kelly, marketing manager at AppliancesDirect.co.uk, commented: “Surprisingly there are still many of us who don’t know how to effectively do our annual spring clean – and even some that don’t know what the meaning of the spring clean actually is, despite it being a longstanding British tradition.

“It’s clear that Brits are leading busier lives than ever before, but it’s important to stay on top of the spring clean, and the task does only come around once every year. Perhaps by separating the spring cleaning chores into smaller chunks among the whole family it can be more manageable and easier for many of us. It also doesn’t have to be dull, so why not make it more enjoyable by playing music while doing these tasks?”

Despite the majority not doing a spring clean this year, 43% admitted that they stress about the cleanliness of their home.