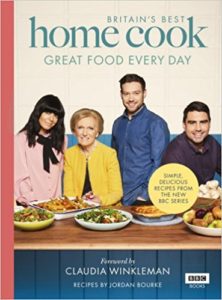 The BBC has released a trailer for its brand new cookery series ‘Britain’s Best Home Cook’.

Over eight 60-minute episodes, 10 contestants will be asked to serve meals that reflect both the modern and classic dishes of British home cooking, in a battle to be crowned the best home cook in Britain.

Their efforts will be assessed by lead judge Mary Berry, along with chef and food writer Dan Doherty and Chris Bavin, a TV presenter and fresh produce importer, best known for co-presenting BBC One’s ‘Eat Well for Less?’

In the clip, which aired this week, Claudia is filmed strolling through the kitchens of the contestants, complimenting their dishes as she explains the premise of the series. In the final shot, Mary is seen discussing a meal with fellow judges Dan and Chris.

A transmission date for the show has not yet been released but Amazon currently lists a hardcover from BBC Books entitled ‘Britain’s Best Home Cook: Great Food Every Day’. Featuring recipes by Jordan Bourke and a foreword by Claudia Winkleman, the title comes out on April 19.

The Amazon entry reads: ‘‘Britain’s Best Home Cook’ is the ultimate collection of delicious, inspiring, achievable recipes from Britain’s most talented everyday home cooks – those who make great food for their family and friends day in, day out.

‘This fully photographed official companion to the series features all the very best dishes from the show’s contestants – the recipes that the judges Chris Bavin, Mary Berry and Dan Doherty consider wonderful home cooking – and step-by-step advice on achieving the same perfect results for classic dishes and the nation’s favourite meals.