Britain is a nation of fridge raiders 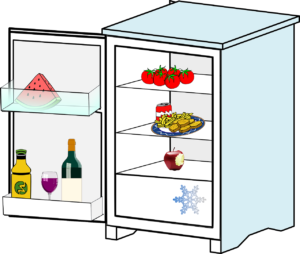 Brits look in the fridge or food cupboard 23 times a day, with women taking the lead in the search for snacks, according to new research.

A survey of homeowners carried out by AppliancesDirect.co.uk reveals Brits look in the fridge 14 times and the food cupboards nine times per day on average, despite eating or drinking something from them just six times.

The study, which examined the eating habits of the nation, found that women looked in the fridge or cupboard 25 times per day compared with men who looked just 21 times.

When quizzed on their behaviour in the kitchen, just 22% of respondents said they look because they are hungry, while 35% said they do it out of habit and don’t have any intention of actually eating anything. The data also revealed the go-to snacks for fridge raiders.

Cheese came top, with 35% of respondents claiming they regularly snack on this, followed by cold meats at 33%.

Chocolate took third place for 29%, while healthier options such as fruit (27%), and vegetables (22%) followed in fourth and fifth place.

Mark Kelly, marketing manager at AppliancesDirect.co.uk, commented: “The data reveals some interesting findings about the nation’s snacking practices, especially the number of times people that look in the fridge and cupboards just out of habit.

“Everyone has that one family member or friend who looks in the fridge or cupboard for a snack whenever they visit – and we’re all guilty of doing it at other people’s homes – but it’s not often that we actually take something out and eat it.”

“That said, it’s interesting to see that when we do snack, it seems to be savoury options that are the nation’s firm fridge-raiding favorites.”

AppliancesDirect.co.uk is a retailer of household appliances. Founded in 2002 in the UK, it is the specialist appliance division of the BuyItDirect Group. Its full range of products can be found at www.appliancesdirect.co.uk