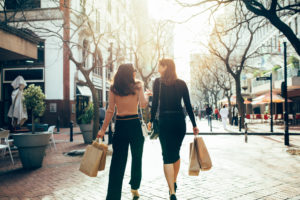 Footfall declined by 0.5% in April, compared to the same point last year when it dropped by 3.3%, according to the latest British Retail Consortium (BRC)-Springboard Footfall and Vacancies Monitor.

Covering the four weeks from March 31 to April 27, the report says that high street footfall dipped by 1%. This was a lesser decline than the previous year when it fell by 4%. The three-month average is 0.1%

Shopping centre footfall declined by 2.1%. BRC-Springboard noted that this is ‘a significant slowdown’ from a year ago when it decreased by 3.1%, and in line with the three-month average.

Springboard marketing and insights director Diane Wehrle commented: “There is an obvious distortion in the year-on-year footfall results for April, due to the early Easter in March last year.

“However, the expected bounty as a result of Easter occurring in April this year did not provide enough of a boost to deliver positive figures for the month, with footfall still -0.5% lower than April last year. This demonstrates the continued challenges facing many retailers, also reflected in the 10.2% vacancy rate [for April], which has risen in each of the past four quarters and is now the highest it has been for four years.

“On a more positive note, the +2.2% increase in footfall in retail parks in April was the highest since June 2017 and indicates that the British tradition of spending time and money on our homes and gardens during Spring endures.

“However, the superb weather over Easter clearly delivered a boost to coastal towns and historic cities, magnets for domestic and overseas tourists, both of which saw footfall rise in April (by +1.8% in coastal towns and +0.7% in regional cities).

“In part this will have accounted for the greater than average decline in footfall in Greater London (-1.6%) and the south-east (-1.5%). A higher exodus of residents from these regions over Easter is a long established trend, further amplified this year as the hot and sunny weather was forecast well in advance, enabling the necessary forward planning for trips.”