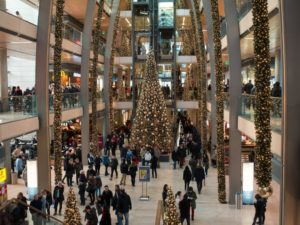 December footfall decreased sharply by 3.5% year-on-year, which is the biggest decline since March 2013, according to figures released by the British Retail Consortium (BRC) and Springboard.

Covering the five weeks from November 26 to December 30, the BRC-Springboard footfall and vacancies monitor shows that all regions showed a drop in footfall for December, with the biggest slumps experienced by Scotland, the south-west and Greater London.

BRC chief executive Helen Dickinson OBE commented: “The sharp drop in footfall this December – while sales grew overall – underlines how shopping is being transformed by the shift to online.

“In the past, shoppers would have exclusively visited physical stores to ensure stockings were filled for Christmas. But improved delivery options by both purely digital retailers, and those with stores and an online offer, mean many purchases of last-minute gifts are moving online.

“The squeeze on discretionary spending also contributed to the decline in footfall. Households had to use their money more carefully; researching products online, rather than heading out to stores to browse.

Springboard marketing and insights director Diane Wehrle added: “A drop in footfall of -3.3% in the weeks leading up to Christmas provided a heads-up for December, with the final outcome of -3.5% of little surprise. This is a significant weakening in performance from December 2016, when footfall in retail destinations dropped by just -0.2%, and it is the worst result for any month since March 2013.

“But it was high streets and shopping centres that struggled in attracting customers. The resilience of retail parks reflects the rise in online activity in December, which drives click-and-collect trips, and the better trading performance of food stores versus non-food retailers.

“Moving forward into 2018, it’s apparent that retailers need to focus on maximising conversion via the core deliverable of best product and customer service with an improved in-store experience, whilst holding their nerve and resisting discounting too early and so protecting margin.”