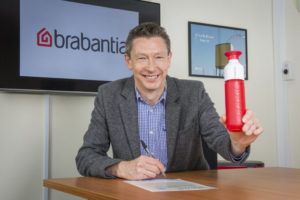 Housewares brand Brabantia has teamed up with Dutch water bottle manufacturer Dopper in a company-wide push to go PET-free.

Brabantia has pledged to scrap single-use plastic water bottles onsite, and has given its 1,000 staff around the globe a reusable Dopper bottle – including all 58 employees at Brabantia’s UK headquarters in Nailsea.

This new initiative supports Brabantia’s vision to help reduce the eight million tons of plastic waste that ends up in the world’s oceans every year, much of which consists of single-use plastic (PET) bottles.

Commenting on Brabantia’s new PET-free workspace, UK commercial director David Slater said: “This collaboration with Dopper has removed all single-use PET water bottles from our workspace, making them a thing of the past. Our partnership with Dopper further strengthens our mission of wanting to be part of the solution, not part of the problem.”

The partnership with Dopper builds on Brabantia’s sustainability credentials. The company designs recyclability into all its products and supports several organisations making a difference in the world. Other partnerships include working alongside WeForest in tree planting to reduce global warming; The Ocean Cleanup in its mission to rid the world’s oceans of plastic waste; and The Hunger Project: for every Brabantia storage jar sold, it supports the charity by funding the training of one person.