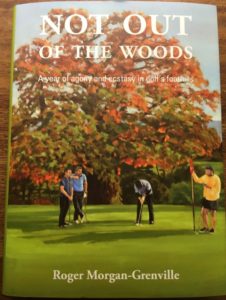 A book written by Roger Morgan-Grenville, director of housewares supplier Dexam, will hit shelves next week.

‘Not Out Of The Woods’ makes its debut at an official launch party at independent bookshop One Tree Books, on Lavant Street at Petersfield in Hampshire, on Wednesday (March 14) between 6pm and 7.30pm.

The non-fiction hardback is a light-hearted account of how four non-golfers – Roger, his friends David Bunker and Trevor Baker, and his undergraduate son Tom – ‘set out to storm the citadels of golfing excellence from a start point of absolute zero’.

Over 18 months, the quartet visited about 30 golf courses across Europe, Australia and the US, taking in 1,500 holes and, according to Roger, “probably well over a metric tonne of beer” along the way.

Publisher Bike Shed Books said: ‘The resulting adventures stand as a blazing testament to man’s capacity to chase the unachievable and find purpose in hopelessness.’

Roger told www.HousewaresLive.net: “We were very lucky to be able to this. The idea was to take a funny look at a serious sport but it really was quite a life-affirming experience, from tantrums and tears to more laughter than I believed possible. It made me realise that you can learn anything at any age – and the value of real friendship.”

‘Not Out Of The Woods’ retails at £15 (including postage and packing). Contact Roger at rmg@dexam.co.uk for stockists.