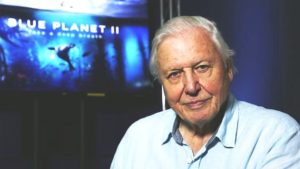 Following the huge global impact of ‘Blue Planet II’ presented by Sir David Attenborough and the BBC’s work around Plastics Watch and the forthcoming ‘Blue Planet Live’, Alison announced new programmes including ‘Green Planet’ (the latest in the ‘Planet’ series examining the world of plants); ‘Meat: A Threat To Planet Earth’ with Liz Bonnin; ‘Population’ with Chris Packham, and a ‘Springwatch’ call to action to record the health of British wildlife.

Sir David Attenborough will also return to BBC One to present the natural history show ‘One Planet, Seven Worlds’ later this year.

In 2017, the multi-award winning ‘Blue Planet II’ series reached over 37 million people in UK and was watched by more than three quarters of a billion people worldwide. Following the final episode, 62% of those surveyed wanted to make changes to their daily lives to reduce impact on our oceans.

Sir David Attenborough said: “We hoped ‘Blue Planet II’ would open people’s eyes to the damage that we are doing to our oceans and the creatures that live in them. I’ve been absolutely astonished at the result that the programme has had.

“I never imagined there would be quite so many who would be inspired to want change. The strength of the response has not gone unnoticed in the corridors of power or in business boardrooms. The actions of just one of us may seem to be trivial and to have no effect. But the knowledge that there are thousands, hundreds of thousands, of people who are doing the same thing – that really does have an effect.”

Across a week in March, BBC One will celebrate marine life as it takes the audience on a deep dive into the world’s oceans in ‘Blue Planet Live’. Broadcasting live across four shows from three different locations across the planet – The East Coast of the US, the Bahamas and Australia’s Great Barrier Reef – the BBC will film in real-time many marine animals that breed and feed at this time of year including turtles, sharks and whales. It will explore the last oceanic frontier that is ‘The Deep’ live for the first time on television. The series will also revisit some of the key locations and animal characters from ‘Blue Planet II’, as well as encountering new ones.

BBC director of content Charlotte Moore said: “‘Blue Planet Live’ will thrill the millions of viewers who discovered so much from last year’s ground-breaking series that shocked the nation. BBC One continues to lead that conversation as we travel live around the globe to witness first-hand the magnificent marine life within our oceans and wake up to one of the biggest environmental crisis of our times.”

Plastics Watch showcases BBC content produced across TV, radio, news and online, providing information and advice to enable the British public to help reduce plastic pollution. It also publishes digital content on the topic, exploring the statistics, science and real life changes that individuals are making around their consumption of single-use plastics.

This comes on the back of the BBC’s own commitments to cut single use plastics which have already seen plastic cutlery and plastic takeaway food containers removed from BBC buildings, with plastic cups being replaced by the end of the year.