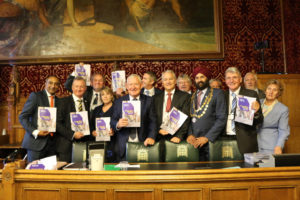 The British Independent Retailers Association (bira) presented its plan for business rates reform to MPs at the Houses of Parliament in London earlier this month.

On September 11, bira asked MPs to consider changing the current £12,000 threshold to an allowance ‘as a much-needed short-term solution’.

Bira believes that an allowance would mean ‘simplification of the relief system. It would mean there would be no need for a Small Business Rates Relief, as there would be a standard application for all businesses across the country – as opposed to the complicated system at the moment, which varies from council to council and currently costs the Government £2.6 billion’.

Bira ceo Alan Hawkins said: “Whilst the Government offered some help to smaller businesses in the last revaluation, by doubling the Small Business Rates Relief threshold from £6,000 to £12,000 (and tapered relief up to £15,000), this doesn’t help the majority of retailers, who on average have a rateable value of £34,000.

“We propose a simple allowance, ahead of a full review of the system, using the same principles of the personal allowance applied to income tax. Through this we believe the majority of those businesses struggling with their tax would see a reduction in their rates. All those below the allowance (which could be, for example, £12,000) would be out of the system completely, cutting down the resource needed to process these.

Alan added: “Bricks and mortar retailers are already at a disadvantage and are being asked to compete on an unlevel playing field. Many retail businesses saw an increase in their rates bill last year, whilst the average bill for Amazon fell by 1.3%. “Our proposal would redress some of the balance, as an allowance would automatically reduce the bill of those businesses that need the most help.”

The visit followed a two-year campaign, which has included representation to a several Government departments to discuss the proposals.

MP Geoffrey Clifton Brown, who is championing the campaign, said: “I was extremely impressed and encouraged by bira’s proposal. It offers a simple and practical method, which would bring instant relief to many thousands of hard-pressed retailers, who are the backbone of our country.”

Commenting after the visit, Alan described it as “a very significant moment in business rates reform and to have such an audience has been extremely encouraging. It shows that bira’s proposed solution to the unfair tax is gaining traction and that the Government is looking for a fair and simple solution, which is what we can offer. There is still work to be done and we won’t give up until independent retailers are on a level playing field.”