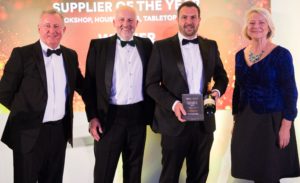 The annual awards, which reward the talent, hard work, innovation and achievements of the trade association’s members, were presented by journalist and author Kate Adie OBE.

Horwood Homewares: a housewares supplier based in Bristol offering an extensive range of products to prepare, cook, serve and dine

Chris Patterson: owner of and managing director of Pattersons (and elected member seat of bira’s board of management).

Pattersons supplies bar, catering and cleaning products throughout the UK, with a large trade showroom in Bristol

Independent Retail Employee of the Year

Independent Team of the Year

Roobarb: a lifestyle boutique selling homeware and giftware at Bridgnorth in Shropshire

Rachel Riley: a retailer of designer and luxury childrensware with two shops in London

Lyn French, The Stitch Mouse: owned by Lyn, The Stitch Mouse is a haberdashery shop at Epsom in Surrey. Lyn is well-known locally for her campaign to knit blankets for refugees in Calais and for other charities

Holli Doherty: channel & shopper activation manager at AkzoNobel, which is a leading global paints and coatings company and major producer of specialty chemicals.

Holli loves being involved in charity projects and is now raising funds for her next venture: building a school for a village in Nepal

Alistair McAuley: UK & Ireland sales director of AkzoNobel, which is a leading global paints and coatings company and major producer of specialty chemicals.

Alistair is on a continued mission to support a charity which helps develop young people from all walks of life through learning and adventure in the wild.

His goal for this year is to raise £150,000, which would match what he raised in 2016. In the past five years he has raised a total of over £1 million for his charity.

Bira ceo Alan Hawkins said: “Congratulations to all our winners, who all truly deserve the recognition received. In previous years, the bira awards and winners have played a key role in raising the profile of independent retailers and reflecting and shaping the landscape in which independent retailers operate.

“The awards recognise and reward the achievements of not just the industry but the inspirational people who work effortlessly day-to-day ensuring the success of their businesses.”