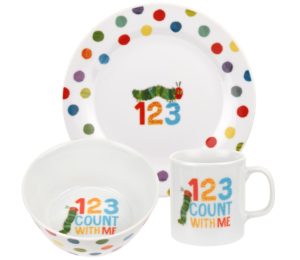 The licensing campaign for The Very Hungry Caterpillar is developing fast, with new product launches and award nominations.

In the housewares sector, Portmeirion has produced a new Very Hungry Caterpillar range including – for the first time – melamine. The collection, which was launched at the Home & Gift Buyers’ Festival in Harrogate in July, includes melamine and ceramic three-piece gift sets, a kids’ baking kit, a placemat, and a sectional plate.

The success of existing and newly launched ranges is underlined by three nominations for The Very Hungry Caterpillar in the 2017 Licensing Awards’ categories of Best Pre-school Brand, Best Licensed Paper Product or Stationery Range and Best Toy or Games Range.

The campaign is managed in the UK by independent licensing company Rocket Licensing through the worldwide agent, The Joester Loria Group.

Rocket Licensing said: “After more than 48 years in print, ‘The Very Hungry Caterpillar’ by Eric Carle is the most-read children’s book in the UK, and the centrepiece of the global licensing campaign around The World of Eric Carle brand. This brings together the works of Eric, who has written and illustrated more than 70 books which have sold over 138 million copies worldwide.”

Charlie Donaldson, joint managing director of Rocket Licensing, added: “The Very Hungry Caterpillar approaches its 50th anniversary as a firmly established and enduring classic of children’s literature. This wonderful story and character has such a wide appeal that it’s no surprise to see it supporting a wide-ranging and enormously successful licensing campaign.”