BHETA wins Tussle on the Turf 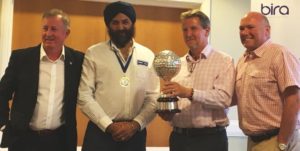 Twelve teams from both organisations battled it out for prizes, with BHETA triumphing as the overall winner. BHETA executive DIY director Paul Grinsell commented: “Obviously we were delighted to win, but the most important thing is to be working closely with bira and its members in a relaxed, business and networking environment.”

Retailer and supplier teams of four competed for the honours and the team prize went to Croydex (BHETA). The individual prize went to Rhys Betteridge of Plasti-Kote, while both the nearest the pin and longest drive prizes went to Darren Nickolls of KitchenCraft, playing for BHETA.

The day was supported by headline sponsor MosBuild from ITE Exhibitions, Spring and Autumn Fair and AkzoNobel.

Plans are already underway for the 2019 event and more member teams are welcome from both sides.