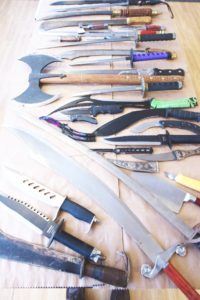 The British Home Enhancement Trade Association (BHETA) is canvassing opinion from its members involved in selling and marketing knives.

The move follows the Government’s recently announced proposed legislative changes in this area.

Under new proposals, anyone who buys a knife online must collect it in person – either at a store or other physical premises – to prove their identity and age. Retailers would be responsible for checking the age of buyers by asking them to show their ID such as a passport or driving licence.

Currently, it’s illegal to sell a blade of more than three inches (7.62cm) to anyone under 18. But reports have suggested that safety checks that can be circumvented.

Home Secretary Amber Rudd said: “We are announcing new measures to combat knife crime and the devastating impact that it has on families, individuals and communities.

“We are going to be consulting on new legislation so that people can’t buy knives online without having their identity checked.

“At the moment, you have to do it by the click of a button. What we’re proposing is that if you want to buy a knife online, it has to be collected from a place where you have to show your ID.

“We have evidence that young people have been able to buy knives without verifying their ID and I want to stop that.”

Arrangements for how online sellers without physical stores can comply will be considered as part of a consultation, to be launched later this year.

BHETA will present its findings to the Government as part of the consultation process. The association is asking members:

BHETA housewares director Will Jones said: “Given that a high percentage of knives are now sold online, the proposals could present a threat to business. On the other hand, such legislation may result in a positive impact on bricks and mortar retail.

“Clearly this is an important issue from many points of view. So it’s vital that we represent the feelings of suppliers in the market in order that the best conclusions can be reached.”

For more information about BHETA, contact the Member Services Team on 0121 237 1130 or visit the BHETA website www.bheta.co.uk.

Weapons that have been involved in knife crime and recovered by the police in London, at Southwark Police Station