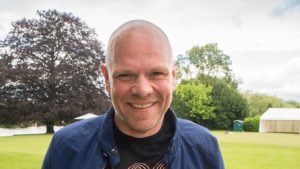 Following the success of TV series ‘Tom Kerridge’s Lose Weight For Good’, which launched to a total audience of 3.5 million, the Michelin-starred chef is back – and this time he’s inviting families who rely heavily on convenience food to press the restart button.

Tom said: “I used to eat convenience food myself. Then I made a decision to change the way I ate for the sake of my weight and health. Ready meals and takeaways are simple and quick, but living off processed food comes at a cost.”

Since changing his own eating habits, Tom has lost 12 stone – and become a father. “Finding the time to eat proper, home-made food together as a family is one of life’s biggest pleasures. I want to help people to discover this for themselves and reap the rewards,” he said.

BBC Two controller Patrick Holland commented: “Audiences loved Tom’s terrific series ‘Lose Weight For Good’. His great recipes and brilliant rapport with the contributors made for empowering and enabling television. I’m delighted that he’s returning to BBC Two with a new series that will bring fresh tips and recipes for 2019.”

Over six episodes, Tom will offer healthy options for home cooking and family mealtimes. He will recruit eight families to road-test his new recipes over a 12-week period and take them through a six-step plan for making ‘a fresh start’, through food, health and exercise. He will measure their health, fitness and happiness at the start and end of the experiment, and hope to see positive changes.

Tom added: “Some of the families don’t cook at all and some struggle to find time to cook proper meals regularly. So the first step is to get people into the kitchen and enjoying the process of cooking on a daily basis. It’s a big ask. But if they do, everything else will follow from that.”

His recipes will include healthier, home-made versions of fast food and ready meals, mid-week suppers, batch cooking to last through the week, and feasts for the weekend.