BBC steps behind the scenes of IKEA

14th February 2018 News Comments Off on BBC steps behind the scenes of IKEA 3,540 Views 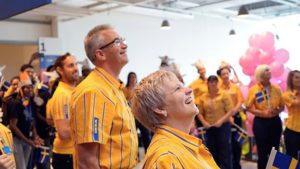 BBC2 is airing a major three-part series that promises to offer never-before-seen footage into the world of Swedish home furnishings retail giant Ikea.

The broadcaster said: ‘IKEA is undoubtedly one of the world’s most successful, enigmatic, and recognisable global brands. Last year more than 900 million people in 49 countries visited its stores, which had a turnover of more than £34 billion.

‘Few companies can legitimately claim to shape the way we live today. Fewer still inspire a cult-like devotion in customers and employees alike. But IKEA is not like other companies.Our cameras explore the world of IKEA, from the design studios to factories and stores, for the very first time.’

Episode one of the documentary, which is entitled ‘Flatpack Empire’, aired on February 6 – just one week after the news of the passing of the brand’s founder, Ingvar Kamprad.

In the show, viewers saw how IKEA is starting to open up its design headquarters to outside influences. British designer Tom Dixon OBE, is invited to collaborate with IKEA on a new bed-sofa – but with deadlines looming and the world’s furniture press watching, neither he nor IKEA fully agree what the product should be

The programme also follows the production of the annual IKEA catalogue (where thousands of products are photographed in extraordinary detail in Europe’s largest photographic studio) and records the 30th anniversary celebrations at IKEA’s first UK store in Warrington. Plus, a group of managers are filmed taking a pilgrimage to Älmhult, the small Swedish town where the company started 70 years ago, to understand culture and values that sit at the heart of the organisation.

In episode two, which aired yesterday (Tuesday February 13), viewers see what it takes to get new products from initial design to IKEA stores around the world. In this show, one of IKEA’s newest designers, Hanna-Kaarina Heikkilä, wants to challenge mass production by creating an ‘imperfect vase’ that has the finger-marks of its creator. She travels to China to see if her idea is possible. The programme also visits the home of the Billy Bookcase as the company tries to pitch a new range of wardrobes. And in Sheffield, the cameras capture the opening of IKEA’s latest UK store.

The final episode airs next Tuesday (February 20) from 9pm to 10pm. In this show, a film crew follow s Mia Lundström, creative director at IKEA India, as she takes on the company’s biggest challenge in a generation: pushing into India with an aggressive expansion plan. Viewers also see designer Andreas Fredriksson try to get his new ‘indoor-outdoor’ sofa through the machine of IKEA, and the documentary records the staff of IKEA Wembley as they undertake one of the biggest store refurbishments in the company’s history: a complete renovation of the branch’s living rooms layout to reflect the new ways people are living at home in 2018.

Commenting on ‘Flatpack Empire’, IKEA said: ‘Through the series, viewers will have a true insight in to the quirks that make the IKEA brand, as well as an understanding of the passion, principles and people that go into creating a ‘Wonderful Everyday’ for customers and co-workers alike.’