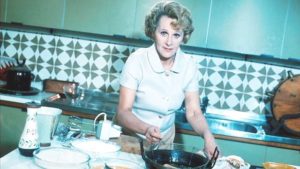 The BBC has delved into its archives to serve up a menu of classic foodie shows.

Series dating back to the 1970s, presented by celerity cooks including Delia Smith and Fanny Cradock, can now be viewed on the BBC’s iPlayer catch-up service.

The broadcaster said: ‘Indulge in a feast of culinary programmes that chart the evolution of the nation’s tastes – and BBC cookery shows – over time.’

There are eight programmes in the TV Dinners strand, which are available to view for over a year:

*‘Floyd on France’, in which the late Keith Floyd celebrates gastronomic regions of France (1987);

*‘Fanny Cradock Invites You To …a Cheese And Wine Party’ (1970), in which the legendary TV cook prepares for her party preparations at home.

Fanny Cradock: one of TV’s first celebrity chefs, famed for her flamboyant and formidable style in the kitchen