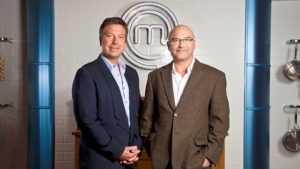 The first episode of the 2017 series of BBC One’s ‘Celebrity MasterChef’ airs on Wednesday August 16 at 8pm.

A total of 20 stars from the worlds of sport and show business are taking part in series 12 of the show.

They will face an assortment of culinary challenges, under the eyes of judges John Torode and Gregg Wallace. They will also cook for food critics and past show winners in their bid to win the crown of ‘Celebrity MasterChef’ champion of 2017.

The first challenge is the ‘Mystery Box’. The contestants must use the ingredients in the box, which include lamb loin, goat’s cheese, butternut squash and rhubarb, as well as a basic larder, to create one dish.

The celebrities are then split into two groups to take on the challenge of cooking for the first time in a restaurant kitchen in London, preparing dishes for paying customers. Jim, Stephen and Henri head to Aster, which is heavily influenced by Nordic and French cuisine, while Angellica and Julia are sent to Temper.

In the final test, the contestants are asked to prepare a two-course menu of their own design in one hour. The celebrities must work furiously in a last attempt to prove themselves to the judges, because at the end of this test, one of them will be going home