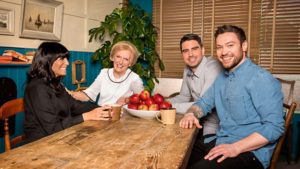 The eight-part series will see cooks showcase recipes that have been passed down through generations, which they share with family and friends every day.

Director of BBC Content Charlotte Moore said: “It’s a delicious recipe: one Mary Berry, add two judges, 10 contestants and then Claudia Winkleman. And it’s exciting to be growing a cooking show on BBC One; the search for Britain’s Best Home Cook continues.”

BBC Head of Commissioning David Brindley added: “This competition truly celebrated what home cooks are creating daily, up and down the country. What we saw in the last series were incredibly passionate cooks whose influences from their experiences and cultural backgrounds were the basis for a range of recipes that wowed our judges. We’re delighted to be bringing another series back to BBC One.”

The contestants will compete to follow in the footsteps of Pippa Middlehurst who won the contest earlier this year with a menu of Massaman curry with jasmine rice, grilled prawns and a Thai herb salad, followed by a Mary Berry-inspired mango and raspberry cake. Her dishes were inspired by her grandmother and grandfather, who introduced her to Asian cuisine at an early age.

If you would like to apply for the next series please visit www.britainsbestcook.co.uk  or email cooking@keofilms.com