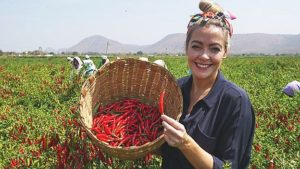 A pan-BBC season entitled ‘The Big British Asian Summer’ will air across TV and radio next month.

BBC controller of factual commissioning Alison Kirkham said: “The Big British Asian Summer is a wonderfully rich season of programmes from across the BBC, exploring the cultural, social and familial impact of these two regions of the world coming together.”

Programmes scheduled for BBC Two include ‘Recipes That Made Me’, in which and cook and restaurateur Nisha Katona travels around the UK discovering the secrets of home-cooked curries and a specially commissioned episode of ‘Inside The Factory’, which shines a spotlight on curry.

In the four-part series ‘Recipes That Made Me’, Nisha will meet British Asian families and cook recipes passed down through generations from the countries of India, Pakistan, Bangladesh and Sri Lanka.

She will be welcomed into their homes, restaurants and places of worship in London, the Midlands, West Yorkshire and Manchester, where she will discover more about their cultures and family stories through food. And as they cook and eat together, Nisha will learn their ‘top tips for creating home-made amazing curries’.

‘Inside The Factory: Curry Sauce’ is the title of the specially commissioned episode of TV series ‘Inside The Factory’. The show’s co-presenter Gregg Wallace will visit a Nottinghamshire factory that produces 250,000 jars of curry sauce every 24 hours. He will make a 3,000 kilo batch of Tikka Masala – enough to feed 25,000 people. Along the way, he deploys some unusual kitchen gadgets, including a decorating colour chart and a hosepipe.

Meanwhile co-presenter Cherry Healey will take a trip to Guntur, the chilli capital of India, where 3,500 tonnes of chilli are sold each day. She will help to harvest chillies on a typical small scale farm and then follow the produce as it’s transformed into chilli powder.

And historian Ruth Goodman will find that Brits’ passion for curry is around 370 years older than the supposed invention of Tikka Masala in a Glaswegian restaurant in the 1970s. She also re-examines the early convenience products of the 1970s and talks to the British Asian housewife whose curry crusade helped to bring high street curries closer to Indian home cooking.

Plus, in a special one hour episode, BBC Two’s Gardeners’ World team of presenters will set out on a horticultural adventure to celebrate the South Asian influences on British gardens.

Fellow presenters Nick Bailey and Arit Anderson will meet British Asian award-winning garden designers Cleeve West and Manoj Malde, Frances Tophill will visit Blackburn in Lancashire to visit some allotmenteers who are growing various Asian produce, from Mooli to Amaranth and Snake Gourds. She finds out what varieties of fruit and veg are popular amongst the locals and learns tips and tricks so she can grow her own.

Finally, Carol Klein will visit Kew Gardens to discover more about Indian orchids with expert Bala Kompalli, who cares for more than 10,000 species of the flower.

Cherry Healey, co-presenter of ‘Inside The Factory: Curry Sauce’