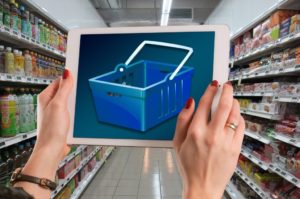 Bakeware and dinner plates have been added to consumer price inflation ‘shopping basket’ of goods and services for 2019, reports Office for National Statistics (ONS).

‘The ‘shopping basket’ of items used in compiling the various measures of UK consumer price inflation is reviewed each year. Some items are taken out of the baskets and some are brought in, to make sure the measures are up-to-date and representative of consumer spending patterns. For 2019, 16 items have been added, 10 items have been removed and 16 have been modified.’

‘As in most years, developments in technology influence the basket update and for 2019, a smart speaker, such as the Amazon Echo or Google Home, has been added.

‘Bakeware has also been added, reflecting increased expenditure in recent years and the growing popularity in baking at home, possibly influenced by the success of various TV cookery programmes.

Other additions include flavoured teas (eg herbal or fruit), introduced due to their increased popularity shown by the shelf-space devoted to them in stores; along with peanut butter, popcorn and electric toothbrushes.

ONS added: ‘In other cases, new items are direct replacements for similar products. For example, lounge furniture is increasingly bought as a combination of single items, such as corner units or settees, rather than a traditional three-piece suite format. This might partly reflect the various styles of modern housing. As a result, non-leather settees have replaced three-piece non-leather suites in the baskets.

‘And a dinner plate has replaced a crockery set, reflecting a change in consumers’ buying habits, with more people buying crockery items individually than as part of traditional sets

‘Other replacements reflect changes in spending patterns. For example, dog treats have been added in place of dry dog food as the balance of spending has shifted between the two. Likewise, washing liquid or gel has been brought in to replace washing powder.’ Other items removed from the 2019 basket include Hi-Fis and envelopes.