Bake Off: The Professionals starts on Sunday

1st May 2018 News Comments Off on Bake Off: The Professionals starts on Sunday 3,072 Views 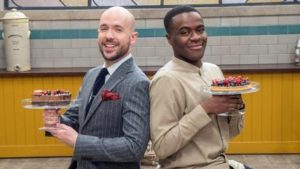 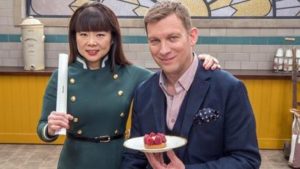 The first episode of ‘Bake Off: The Professionals’ airs on Sunday (May 6) at 8pm on Channel 4.

In this spin-off from ‘The Great British Bake Off’, 12 teams of trained pastry chefs will go head to head in ‘the UK’s toughest professional bake off’.

Over 10 one-hour episodes, the contestants will be challenged in a series of competitive heats that will test their ability and allow them to showcase their creative flair.

Their efforts will be judged by celebrated pastry chef Cherish Finden, who is the creative development chef at Godiva Chocolates, and Benoit Blin, who is chef patissier at Belmond Le Manoir Aux Quat’Saisons restaurant in Oxfordshire.

The show will be presented by Tom Allen and Liam Charles, who will offer their own comedic take on events in the chefs’ kitchen.

Tom is a comedian, actor and writer and Liam was a contestant in series 8 of ‘The Great British Bake Off’, which aired on Channel 4 last Autumn. The 20-year-old student came fifth and was eliminated on October 17 but to many viewers, he was one of the show’s standout stars. His enthusiasm for baking and use of interesting flavours won him praise from the judges and admiration from fans.

In episode one, the contenders will compete to make perfect batches of miniature classics – 24 conversation tarts and 24 tartes aux fruits – as well as a reinvented Black Forest gateau.

It was announced last October that ‘Bake Off: The Professionals’ would move from BBC to Channel 4. The show previously ran for two series under the title ‘Bake Off: Crème de la Crème’, hosted by Tom Kerridge and Angus Deayton.

Channel 4 deputy director of programmes Kelly Webb-Lamb commented: “We’re delighted to welcome ‘Bake Off: The Professionals’ to Channel 4 and with it, two new faces in their first presenting roles. ‘Bake Off: The Professionals’ will combine the charm and tension of ‘The Great British Bake Off’ with mouth-watering professional creations that will inspire viewers to experiment themselves.”