Bake Off has ‘well and truly landed’ says Channel 4 boss 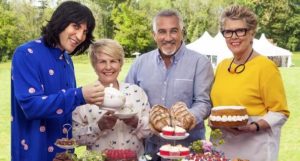 Consolidated viewing figures released last week – taking account of time-shifted TV viewing over a seven-day period – show that Channel 4’s first episode of ‘The Great British Bake Off’ was watched by an average of 9.5 million viewers, representing a 35.4% share of the audience.

The consolidated audience includes 2.7 million 16-34 year olds, making it the biggest programme for young viewers on any channel so far in 2017.

Additionally, the repeat showings on Channel 4, E4 and 4Seven were watched by a further 1.5 million viewers.

Episode one has also attracted a record-breaking 1.1 million views on All 4, making it the on-demand channel’s biggest ever catch-up audience within seven days across Channel 4’s owned and operated platforms. (This figure excludes data from third party platforms such as Sky, Virgin and BT which isn’t immediately available.)

A total of 70,000 viewers streamed the episode via All 4’s Watch Live.

Channel 4’s chief creative officer Jay Hunt commented: “‘The Great British Bake Off’ has well and truly landed on Channel 4, with episode one delivering the highest number of young viewers for any show on any channel this year. I’m thrilled that viewers have warmed to Paul, Prue, Noel and Sandi, and are enjoying the exceptional standard of baking.”