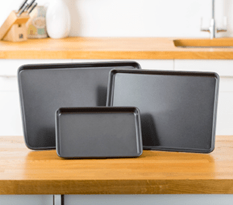 Robert Dyas has reported a surge in bakeware sales and jump in cake-making and decorating products since the start of the current series of ‘The Great British Bake Off’.

The hardware and housewares retailer said the term ‘bakeware’ has been searched on its website more regularly since the series launched in late August, and there has been a ‘significant increase’ in visitors to its bakeware section.

Rachel Brain, chief operating officer of the high street chain, said: “Since the show has been on air this season we’ve seen a notable increase of 55% in bakeware sales and 42% in cake-making and decorating products, both in store and online. We’ve also seen a 10% increase in our kitchenware range overall.”

“There has been a direct correlation between the number of people watching the show and those interested in recipes and baking equipment. This series has proved extremely exciting with more challenging bakes than ever before, and we’re looking forward to seeing what else is in store.”

Robert Dyas was acquired in 2012 by business tycoon Theo Paphitis, a former star of BBC’s ‘Dragons’ Den’. Commenting on the new format of ‘The Great British Bake Off’, he said: “It’s fantastic to see what [judge] Prue Leith and the team have done with one of Britain’s most loved shows.

“At a time when we are being cosseted and warned about sugar intake, we mustn’t forget the great pleasure that home baking brings to families throughout the UK every day of the week.”

Robert Dyas operates 94 stores, ranging in size from 1,250sq ft to 9,000sq ft in the South of England: from Yeovil to the west to Colchester in the east. The most northern store is in Solihull and the store furthest south is in Eastbourne. The firm’s head office is in Wimbledon.

A selection of Robert Dyas bakeware