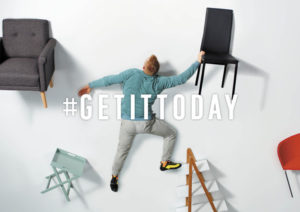 Argos has launched a Spring-Summer advertising campaign which it describes as a world first for a brand.

The ‘80 Days of Argos’ campaign is made up of a series of 10-second spots, celebrating how customers can ‘seize today’ with Argos throughout Spring and Summer by using its fast track delivery service. This offers four same-day delivery time slots, including evenings, seven days a week, for £3.95.

Drawing inspiration from events in the nation’s calendar, from the London Marathon to Wimbledon, as well as the weather, the campaign aims to encourage viewers ‘to make the most of each day by getting what they want delivered today’.

The campaign spotlights products that can be ordered and receive on the same day such as the new Nintendo Switch, Beats headphones, Sony TVs, Dyson fans and outdoor goods such as bikes, paddling pools and barbecues.

Each execution uses the products as a focal point to celebrate that day’s date in a visually creative way – such as chattering Furbies, troll dolls having a blow-dry, a TV cinema drive-in and cats typing on laptops – all set against the ‘white world’ backdrop of previous Argos campaigns.

Dan Elton, brand, strategy and marketing planning director at Argos, said: “This campaign celebrates everything that makes Argos great – the market-leading same-day delivery which sets us apart from competitors, the playful tone to surprise and delight customers, and a focus on the vast range of fantastic brands and products we offer.

“We hope the campaign inspires customers everywhere to seize the day and make the most of the Spring and Summer, whether that’s getting a paddling pool for the kids to enjoy a sunny day, a new TV to watch the Champions League final or a tent for Glastonbury.”

Running across TV, VOD (Video On Demand) and digital, social media and in-store screens, he said the campaign marks a TV media first: 80 unique pieces of copy within one campaign all running with a different date called out.

It will be supported by an influencer marketing campaign in which social media stars set their fans a series of same-day challenges which can only be achieved using Argos Fast Track.

Sainsbury’s Argos offers more than 60,000 products under the Argos and Habitat brands. It sells through www.argos.co.uk, www.habitat.co.uk, its growing mobile channels, its 845 stores and over the telephone. Argos Digital Stores and Mini Habitats can also be found in Sainsbury’s supermarkets.

More than half of the company’s sales originate online and around 120 million customer transactions take place in its stores each year.