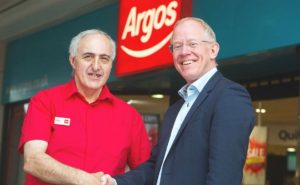 Argos marked its 45th birthday in style in Manchester today (Friday July 6) with a special ceremony celebrating its longest-serving employee, who joined the retailer in the year it launched on the high street.

Argos ceo John Rogers presented Philip Stone, aged 61, with a certificate, a £500 gift voucher and a cake designed to resemble the very first Argos catalogue from 1973.

Since Philip joined Argos, the company has remained a stalwart of British high streets as well as adapting to the digital age. Argos claims its website is the third most-visited retail site in the UK, with more than 1 billion visits a year – and 60% of Argos sales now start online.

John commented: “Philip’s commitment to Argos is exceptional. It’s thanks to his efforts, as well as those of our other 30,000 colleagues, that Argos continues to hold such a special place in the hearts and minds of customers across Britain.

“Over the past 45 years, Argos has endured the ups and downs of the retail landscape, remaining a much-loved British institution and familiar face on British high streets and in the online world.”

Philip said: “I’ve seen many changes at Argos over the last 45 years – from Green Shield Stamps to Fast Track delivery – and providing great service for our customers has always been at the heart of this. I’ve been privileged to work with a fantastic team of people over the years and look forward to celebrating 50 years with Argos.”

Representatives from Alzheimer’s Society, a UK care and research charity for people with dementia and their carers which this week launched a four-month summer partnership with Argos, also attended the event. Argos aims to raise around £300,000 for the charity through employee fundraising.