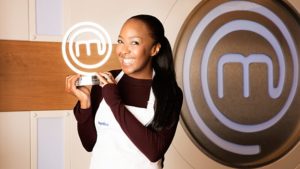 After four weeks of heats, two weeks of semi-finals and finals, and an emotional final cook-off, Angellica beat 19 fellow celebrities to the title.

The series 12 trophy was presented to her by judges John Torode and Gregg Wallace at the end of the final episode, which aired on September 22.

Angellica said: “I’m overwhelmed to be this year’s Celebrity MasterChef Champion. It’s been one of the most stressful yet rewarding experiences I’ve ever been through.

“I didn’t realise just how passionate I was about food and how much I thrived on learning more. When John and Gregg announced my name, I was beyond thrilled and I want to thank them and the show for allowing me to have this experience.”

Gregg commented: “Angellica is one of the best Celebrity MasterChef contestants I’ve ever seen. Her food has elegance and style. I think she’s a very worthy winner.”

John added: “Angellica makes sure everything that she does is done to absolute perfection. Throughout the competition, she pushed herself. Give her an opportunity to learn and she sucks it up and does it brilliantly. She’s done herself proud.”

Her final task was to cook and present a faultless three-course meal for them in two-and-a-half hours. Her menu consisted of a starter of Camembert, fig and onion tart, a main of pan-fried halibut and king prawns with a creamy vermouth sauce, and a dessert of Pear Bourdaloue, which Gregg described as “nothing short of brilliant, one of the best desserts I’ve ever tasted”, and John called “perfect in every way, shape and form”.