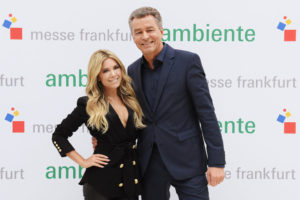 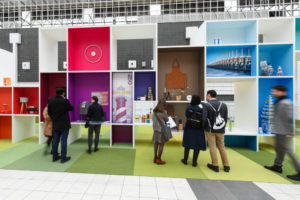 A guest of honour at this week’s Ambiente trade show, held in Frankfurt from February 9 to February 13, was Sylvie Meis.

The Dutch TV presenter, model and entrepreneur, who is very popular in Germany, took a tour around the halls of the exhibition, with the focus on home accessories from the Netherlands and Germany.

Sylvie was particularly interested in the designer lamps of Dutch company It’s about RoMi and the collections of handmade silk flowers from another Dutch company, Silk-Ka. Products from Exotica Cor Mulder, Fink, Lightmakers, Pad Home and Tenbos also caught her eye.

“The range at Ambiente is simply unbelievable!” she said. “There are so many shapes, styles, colours and materials to explore. It makes me want to redesign my own four walls! In fact, at the moment I’m creating a guest apartment for my family from the Netherlands. These ideas are perfect for fitting it out in a Dutch style, so my relatives will really feel at home there.”

Sylvie was also impressed by the show’s ‘partner country’ presentation, which was given by the Netherlands. One person who was particularly involved in putting Ambiente 2018 under the Dutch banner was the Dutch industrial designer Robert Bronwasser. Under the theme of ‘DO DUTCH’, he staged an elaborate presentation, highlighting the country’s design expertise by ‘putting consumer goods from the Netherlands in a new and unusual context’.

Next year’s Ambiente will be held from February 8 to February 12 at Messe Frankfurt.

Above left: The DO DUTCH partner country presentation

Above right: Sylvie Meis with Detlef Braun, member of the executive board of show organiser Messe Frankfurt