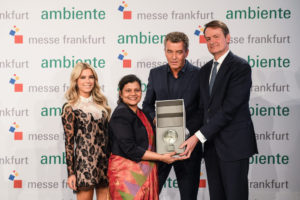 India has been named as the partner country for Ambiente 2019.

The announcement was made by the German trade fair’s organiser Messe Frankfurt at a ceremony during the five-day show, which ended on February 13.

Detlef Braun, member of the executive board of Messe Frankfurt, said: “After Japan, India is now Ambiente’s second Asian partner country. With its population of over 1.3 billion, India has an incomparable diversity, a rich culture and a tradition of art and craft. It’s also among our absolute top countries in terms of exhibitors. I’m confident that its partner country presentation will be a real highlight at Ambiente 2019.”

This year’s partner country was the Netherlands. The partner country globe is always handed over at a ceremony in honour of the current partner country. The country that receives the globe can then present itself at a special feature at the next Ambiente.

On Monday (February 12), watched by a large crowd of guests from industry and government, Pratibha Parkar, Consul-General of the Republic of India in Frankfurt, accepted the partner country globe from the Ambassador of the Kingdom of the Netherlands, Wepke Kingma.

The Indian Minister of State for Textiles Ajay Tamta commented: “India is happy to be the partner country at Ambiente 2019: one of the biggest global consumer goods and trade fairs.

“India’s participation will add to the vibrancy and diversity of the fair, and familiarise global manufacturers, retailers and brands with the robust entrepreneurship of our textiles, apparel and consumer products – and will open up opportunities for sourcing and investment. We are looking forward to this collaboration, which will help develop long-term sustainable partnerships with the value chain in Germany and other countries.”

This is the eighth time that the partner country globe has been handed to another country at Ambiente. After Denmark, France, Japan, USA, Italy, UK and the Netherlands, the Republic of India will be at the focus of visitors to Ambiente 2019, which will be held from February 8 to February 12 at Messe Frankfurt.