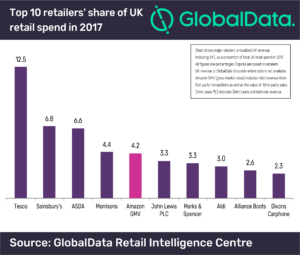 Amazon is now the fifth biggest player in UK retail, according to GlobalData.

The data and analytics company said the online giant accounted for over £4 in every £100 spent on retail in 2017, with its revenue estimated to have risen 22.5% last year, compared with a total online spend rise of 8.4%.

GlobalData claimed Amazon is not only taking share from its UK competitors but is forecast to have accounted for 33.5% of all UK spend online in 2017 versus 29.6% in 2016.

Sofie Willmott, senior retail analyst at GlobalData, commented, “Amazon is soaring up the ranks of UK retail, with the online behemoth only held off the top spot by the big four grocers [Tesco, Sainsbury’s, Asda, Morrisons] in 2017.

“Its dominance in the retail market – considering it primarily sells non-essential items in comparison to the grocers who benefit from selling indispensable, everyday goods, and that it does not have any physical stores in the UK – is evidence of how Amazon has continually innovated and succeeded in meeting consumer needs, in terms of both product range and shopping experience.’’

GlobalData noted that given Amazon’s ‘phenomenal performance and the limited growth forecast in retail spend over the next five years, it’s no surprise that retailers are eager to get on board and ramp up their online sales in an attempt to drive incremental sales via a new sales channel’.

Sofie said: ‘‘It’s imperative that retailers continue to give shoppers a reason to visit and purchase from their own sites, such as exclusive products or loyalty rewards, to maximise profits and consolidate their place in the market.’’