AIS Housewares Show ‘bigger and better’ than ever

15th March 2019 News Comments Off on AIS Housewares Show ‘bigger and better’ than ever 2,126 Views 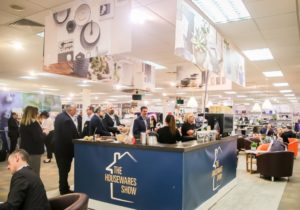 The Housewares Show returned to the Cranmore Park Conference & Event Centre in Solihull on March 5 and March 6 with ‘more exhibitors than ever before, greeting many returning brands and some new faces,’ according to organiser AIS (Associated Independent Stores).

On the first day (March 5) the event was exclusive to AIS members while on day two (March 6) the doors were opened to all independent retailers.

AIS homewares controller Rachel Breen said: “It was our largest event to date, held across two showrooms with over 1,000 brands from more than 70 exhibitors.

“Trend areas were pocketed around the showrooms, displaying on-trend themes and providing inspiration on how to create impactful in-store displays. These included marble, hydration and eco-friendly products.”

Another show highlight was a free social media training area, which Rachel described as “a great success, offering suggestions to retailers on how to drive more traffic to their social media pages and create more brand awareness. We teamed up with a market-leading advertising agency McCann who held demonstrations and drop-in sessions, and the response from attendees was very positive.”

Established brands at the show included KitchenCraft, Horwood, Denby, Joseph Joseph, Brita, Tefal, De’Longhi and Morphy Richards, with many featuring new product launches. Horwood showed its Smidge range which covers a wide variety of categories and has a 100% bio-degradable and recyclable formulation that means no plastic or melamine makes it into the environment, while Denby displayed its new Studio Grey stoneware range.

Commenting on the show, Tim Yeadon, national field sales manager of exhibitor KitchenCraft, said: “The show was extremely positive for KitchenCraft as a business. The presentation and facilities were first class, as always, and initiatives such as the eco and hydration displays were very well received. The attendance and support of AIS members felt very robust and the addition of the ‘non-members’ day on Wednesday (March 6) created an interesting dynamic.”

This year, 11 new exhibitors joined the show including Sage, Valerie Graham, Shifa Aromas, Umbra, GreenPan, Snips, Sigg and Captivate Brands. Reflecting on Captivate Brands’ experience, senior national accounts manager Matt Sampson described the event as “a very positive first Housewares Show for us, with plenty of interest and several orders taken from buyers looking for new and exciting products from alternative suppliers! We are very excited to be working with The Housewares Show and look forward to the next one in Autumn.”

The Housewares Autumn Show will return to the same venue on August 13 and August 14.