A plea from the Editor of The Good Food Guide 2018

While some restaurant trends are a benefit to the customer, such as offering free tap water as standard, others can be off-putting, according to the editor of The Good Food Guide.

Elizabeth Carter has issued a plea for two trends to fade. She said: “Restaurants are getting noisier – that’s what our readers, this year in unprecedented numbers, are telling us. Noise levels, already a 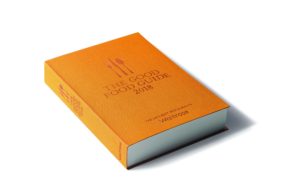 mplified by bare-bones design, are being raised by music played at Glastonbury force.

“Everyone loves a restaurant that has a buzzing, vibrant atmosphere. But it becomes exhausting and self-defeating when, as one old hand told us: ‘I have never heard such loudly amplified music in an eating place. It was so loud that I couldn’t hear a word the waitress was saying, and vice versa. We had to gesture and point.’ The reporter was not recommending inclusion in the guide.

“As for that other trend that’s been warmly embraced by chefs and restaurateurs across the country – let’s be honest, small plates are frequently not designed to be shared. Why the reduction in size, if more than one person is supposed to be eating it?

“If plates are for sharing, there ought to be more, not less, food – after all, a dish featuring a fried egg is best tackled by a solo diner. Moreover, these plates often come out in a random, inhospitable manner. As customers, we have let this weak formula go unchallenged for too long.”

‘The Good Food Guide’ is published by Waitrose on September 4 and will be available to buy at the supermarket for £17.99. The 2018 edition is the fifth to be published by the grocery retailer. It lists 50 restaurants which it recognises as the very best in the country.