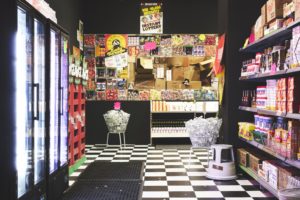 An American rapper, producer, director, actor and model called A$AP Rocky has partnered with Selfridges to create a temporary retail space in its flagship London branch.

Open for just 10 days, from last Monday (October 2) to Wednesday (October 11), the AWGE Bodega (named after the international AWGE creative collective that A$AP Rocky leads) takes its inspiration from the ubiquitous corner store vendors found across the city of New York.

Selfridges said: ‘Bodegas are neighbourhood institutions, which were originally set up by predominantly Hispanic and minority-owner/entrepreneurs in the 1950s and 60s. Open all hours, Bodegas sell groceries, snacks and candy, lottery tickets and essentials to the local community.’

The life-size AWGE Bodega has been set up in the department store’s lower ground floor, with the aim of bringing an authentic US flavour to Oxford Street

A$AP Rocky said: “I’m excited to collaborate with Selfridges for the AWGE Bodega, and hope that this will serve as an example for creative new retail concepts.”

Selfridges buying & merchandising director Sebastian Manes added: “Ever since we first met Rocky, we’ve wanted to create something together. I feel like there’s a natural connection between Selfridges and AWGE, so translating and transforming a colllective creative vision into a shoppable, interactive reality is exciting. The AWGE Bodega will be a shop within our shop unlike any other.”

Visit www.selfridges.com/awgexselfridges to book a timeslot.