A maze of maize all set for Waitrose summer festival

7th August 2017 News Comments Off on A maze of maize all set for Waitrose summer festival 2,631 Views 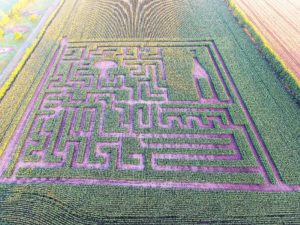 A three and a half acre maze of maize has been created for a summer festival being held on Waitrose’s farm in Hampshire later this month.

The Waitrose Summer Festival will take place from August 18 to August 20 at Leckford Estate, which is the supermarket’s farm.

While enjoying food, drink and music, festival-goers will also be able to tour the 4,000-acre site. It is home to a herd of 550 cows, apple and pear orchards, mushrooms, over 1,500 acres of wheat, barley and oats, oilseed rape – and the retailer’s own vineyard, which produces grapes for its own Leckford Estate sparkling English wine.

There will be a food and drink village with an array of pop-ups, including ‘Good Food Guide’ recommended restaurants.

Festival-goers will also be offered the chance to sample some of Heston Blumenthal’s ‘summer sizzlers’ in a Heston from Waitrose pub-style pop-up.

The maze was designed by farming manager Andrew Ferguson and took 40 hours to mow. It is made of the 7 foot high crop, in the shape of a mushroom and a bottle of wine.

This drone photo was taken last week by Paul Hewitt, assistant greenkeeper at the Waitrose Farm