A house, car and coffee machine: the markers of adulthood? 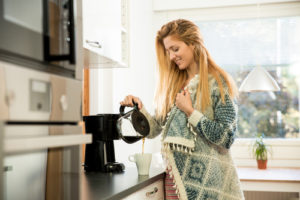 New research has revealed the top ten purchases that Brits feel define adulthood – and housewares products are high on the list.

A survey of 1,124 UK adults conducted by household appliances e-tailer AppliancesDirect.co.uk shows that almost three-quarters of Brits (73%) feel that becoming a homeowner is a purchase that makes them feel like they’d reached adulthood.

Two in five (41%) said it was buying their first car, while 36% said it was a washing machine. More than three in ten (34%) said the item that made them feel most grown-up was a dishwasher. Completing the top five was the purchase of a coffee machine, with 32% of those quizzed citing this product.

The research further revealed that 31% would consider buying a lawnmower as defining their adulthood, closely followed by an iron (28%). And 22% of Brits said buying a vacuum cleaner made them feel like an adult, with 18% saying a TV licence. Completing the top 10 was an oven (15%).

Mark Kelly, marketing manager at AppliancesDirect.co.uk, commented: “Becoming a homeowner is an exciting time for anyone and in most cases, it’s the biggest purchase anyone will ever make. As our research reveals, many Brits feel the purchase of their first home is a defining marker of adulthood, though I was surprised to see that some of the more regular household items such as coffee machines and irons were chosen by those surveyed.

“It was really interesting to note from the findings that 31 is the age that Brits said they felt like they’d reached adulthood. Of course, we’re legally adults on our eighteenth birthday, though it’s clear that many Brits don’t class themselves as having reached adulthood until they feel they’ve matured more. And it’s obvious that it’s not just homes and cars that are important adulthood milestones for Brits, with the purchase of household items being more important to many.”